After having started in the above mentioned topic in this blog (consult "AdBlue for passenger cars "), on this occasion, we intend to elaborate on the structure and operation of the analysed system adopted by the different manufacturers in their vehicles.

Each manufacturer "baptises" their NOx treatment system for the diesel engine with a commercial name, normally under the umbrella of the word “Blue”.

It is worth mentioning that some makes/brands, such as Volkswagen, Audi, and Seat do not assign any name that is visible in the vehicle logo.

Reducing agent:As noted on previous occasions, the AdBlue reducing agent is based on an aqueous solution consisting of a 32.5% urea and 67.5% water. This compound is not dangerous to people or the environment.
However, included in the features of this product we highlight two peculiarities capable of generating problems:
-Due to its high water content it freezes at -11°C.
-In contact with the air, the Adblue tends to crystallize and can cause blockages in pipes and ducts.

Summary of the operation:
As you know, the AdBlue reducing agent is dosed directly into the exhaust pipe thanks to the electronic injector. With the exhaust temperature, the additive is transformed into ammonia and enters the SCR reduction catalytic converter. This takes care of removing the NOx by chemical reaction, transforming them into nitrogen and water. The NOx sensor located at the output of the SCR checks there are no nitrogen oxides present at the output.

Features of the system 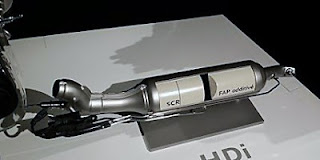 Additive tank:
Usually integrated into the tank is the pump-gauge, which is for measuring the volume of the tank and pumping the reducing agent at sufficient pressure to the exhaust pipe injector.

The assembly includes the following components:

Reducing agent level sensor:
Determines the volume of AdBlue contained in the tank. Normally it discriminates between three volumes and there is no indicator “needle” on the instrument panel, the driver is warned via a warning or indicator on the multi-function display.

Electric pump for reducing agent:
The pump sucks the additive from the tank and pumps it at a pressure of between 4 and 6 bar to the injector. This does not work continuously, it only works when it is necessary to inject additive. Some systems include a accumulator so there is immediate pressure at the start of the injection. 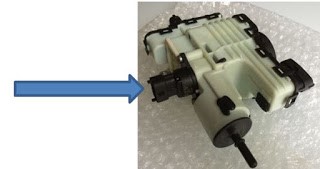 Heating circuit:
To combat the problem of the product freezing, the additive circuits are protected by a heating system which starts up when the temperature is low.
The heating is distributed into three branches that can be activated independently:
-Additive pump heater: there is an electrical resistor inside the pump capable of heating the component.
-Tank heater: a resistor is immersed in the tank to prevent the stored AdBlue product from freezing.
-Reducing agent lines: the whole length of the pipe is protected by a heating resistance. 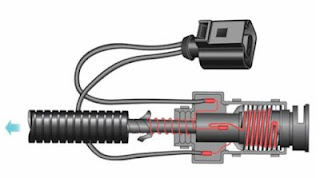 Reducing agent injector:
The additive process finishes when the reducing agent is dosed into the exhaust. The injector is controlled from the injection unit and when it opens it receives an electrical signal for its activation. 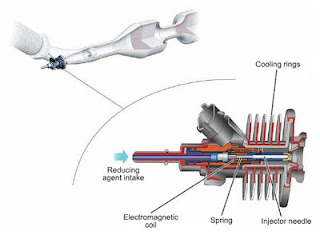 NOx sensor:
After the SCR catalytic converter, the NOx sensor measures the efficiency of the system. If this compound is present at the output, the engine fault light comes on and indicates a fault in the SCR system.

Starting lock
The EU VI anti-pollution regulations require that whenever a vehicle uses an additional reactive agent for treating exhaust gases, the engine starter can be locked whenever there is no reducing agent or any fault that could cause the vehicle to pollute more than specified by the standard.
As the reducing agent is used up the driver is advised with different alert levels:
Alert at 2400 km: this is the first indication, advises of the remaining range, once this alert has been given it is repeated every 100 km.
The yellow SCR system indicator lights up permanently.
1000 km indication: indicates the remaining range. Warns the driver that if the level is not reset it will not be possible to start the engine once it has stopped.
The warning is repeated every 50 km.
The SCR system indicator light is yellow and flashing.
Indication of absence of reducing agent: indicates prohibition on starting the engine.
The SCR system indicator is permanently red.

It is possible to cancel the engine start lock with the diagnostic tool in order to drive 50 km to take the vehicle to the workshop.


Generally, if the last warning has been given, the system requires an adaptation process with the diagnostic tool.